Unit 10 We Had A Great Time 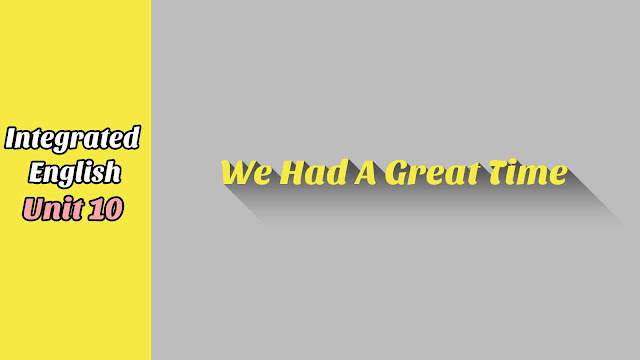 Read the fairy tale and do as instructed.

JACK AND THE BEANSTALK
Once upon a time there was a boy called Jack. He lived with his mother. They were very poor. All they had was a cow. One morning, Jack's mother told him to take the cow to the market and sell her. On the way Jack met a man. He gave Jack some magic beans for the cow. Jack took the beans and went back home. When Jack's mother saw the beans she was very angry. She threw the beans out of the window. The next morning,  Jack looked out of the window. There was a giant beanstalk. He went outside and started to climb the beanstalk. He climbed up to the sky through the clouds. Jack saw a beautiful castle. He went inside. Jack heard a voice "Fee, fi, fo, fum!" and ran into a cupboard. An enormous giant came into the room and sat down. On the table there was a hen and a golden harp. "Lay/' said the giant. The hen laid an egg - it was made of gold. "Sing" said the giant. The harp began to sing. Soon the giant was asleep. Jack jumped out of the cupboard. He took the hen and the harp. Suddenly the harp sang "Help, master!" The giant shouted, "Fee, fi, fo, fum!". Jack ran and started to climb down the beanstalk. The giant came down after him. Jack shouted "Mother,help!". Jack's mother took an axe and chopped down the beanstalk. The giant fell and crashed to the ground. Nobody ever saw him again. With the golden eggs and the magic harp Jack and his mother lived happily ever after.
a. Based on the tale, read the sentences below and write 'frue" or 'false".

b. Answer the questions in complete sentences.

a. Complete the sentences with the Simple Past of the verbs in brackets.

b. Write the past forms of the following verbs.

Choose a suitable verb of the past form you wrote in the above part to fill in each blank of the following sentences.